Last Sunday, European finance ministers met.  In reporting that meeting, the UK and Irish media focused on the terms of Ireland’s bailout. However, something far more important and fundamental to the future of Europe was also discussed at that meeting.

The Finance Ministers agreed the outline of a new plan for a permanent mechanism for to resolve the debts of Sovereign nations within the Eurozone. As reported by Yahoo Finance

“They also approved the outlines of a long-term European Stability Mechanism (ESM), based on a Franco-German proposal, that will create a permanent bailout facility and make the private sector gradually share the burden of any future default” 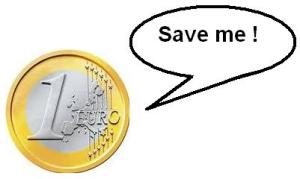 The prime purpose of creating this mechanism now is to calm the money markets and keep the Euro safe.  At fist sight, the plan looks to have been well thought out. Earlier statements by Angela Merkel, alluding to the “punishment” of investors were destabilising. The new plan now looks to be much more measured. There will be a risk to bondholders in the sharing of losses but only in the future – after 2013 and on a case by case basis. The finer details of this plan have yet to be worked out and finalised.

The French and the Germans say that “the Euro is saved”

Is it really? In the last couple of days, the markets have reacted negatively. The Euro has fallen in value against the dollar. Interest on bond yields for Italy, Portugal and Spain continue to rise.

The UK has a huge interest in seeing the Euro survive and stabilised from two perspectives. Firstly, there is the vulnerability of our banks. The amount owed to UK banks by Irish Banks totals around 140 billion. A similar sum is owed to the UK banks by the Spanish Banks. Secondly, a collapse of the Euro would cause huge damage to our exports and probably plunge us into another recession. A collapse of the Euro would be an unmitigated disaster for the UK. It is hard to know exactly how international markets will see Britain after such a collapse.

Britain’s very high level of indebtedness could become a feature of a future panic on the markets. The full spectrum of British debt owed between Banks, Government, Corporations and individuals is frightening. The UK is the most heavily indebted nation per capita in the world behind Japan. Japan has been earmarked as potentially the world’s biggest ever national bankruptcy. I don’t believe that the UK is likely to become bankrupt. Unlike the UK, most of the debt owed by the Japanese is owed by its government. However, should our own banks require further re-capitalization, the Government will not wish to risk going down the road taken by the Irish Government in 2008.  It is only likely to allow the strongest Banks to survive.

In conclusion, we are in this crisis as deeply as the rest of the Eurozone nations are, whether we like it or not.  Our vulnerability is likely to result in huge pressure from the Europeans to join them in measures to save the Euro.  The problem is, we do not yet know if the euro can be saved or is indeed worth saving.  The most puritanical view is that the Euro can only survive if there is political union. John Redwood MP recently advocated that view.

Very soon, I suspect that our Government will require the wisdom of Solomon.