Within the next 19 months, there is likely to be a UK – wide referendum on replacing the First Past the Post (FPTP) system with Alternative voting (AV).  The First Past the post system has served us well for a long time but our history also shows us that our democracy does reform itself where necessary.  Is this the time to change first past the post?  Summarising the history from the founding of the first Parliament to the AV referendum, this post considers what questions we might ask ourselves when it comes to casting our vote.

Although democracy of some sort emerged in the classical world more than 2000 years ago, the story of modern world democracy begins in England.

In 1265, Simon de Montfort founded an elected Parliament. It was the first elected parliament of any in the medieval world comprising of representatives from each county in the Land. A few months later, De Montfort, who had been England’s de facto ruler, was killed at the battle of Evesham by the King’s forces headed by crown prince Edward (later known as “Longshanks”). Longshanks was later to become one of England’s greatest ever rulers.

In 1294, the French went to war with England in order to try and seize the Dukedom of Gascony (South West France) from the possession of the English King. 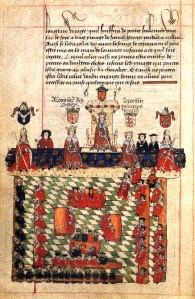 Edward I presiding over Parliament c. 1300

In 1295, then as King Edward 1st, Longshanks re-founded Parliament. The original purpose of this Parliament was to make it easier way to raise taxes, using elected representatives to broaden the King’s support and assist in the levy of the revenue. This Parliament was to evolve into what it has become the House of Commons today.

The principle of a single representative for each particular area has endured for centuries. Complete democracy (one man or woman – one vote for all adult citizens) did not become part of election law in Britain until 1928. However, it is also fair to say that between the middle-ages and the 19th Century, the political system of England (and later Britain) produced arguably the most advanced form of any democracy in the world.

The English and British Parliaments were not without their difficulties. In the 17th Century, they endured and survived war and revolution. The constitutional monarchy, that eventually evolved, came about through good fortune. Following the death, in 1714, of Queen Anne, the last protestant monarch of the Stuart line, George 1st of Hanover, Germany, ascended to the throne of Great Britain. He was also unable to speak English. From that point onwards, British executive power was effectively exercised by the Prime Minister and the Cabinet. Sir Robert Walpole was the first of a long line of British political leaders and holding the office of Prime Minister. That milestone meant that the great British “ship of state” did not depend upon the health of the Monarch. Indeed, King George III became so mentally ill that he was incapable of exercising his powers as the head of State. The King’s functions and powers transferred to his son, George, acting as Regent and the business of Government continued more or less unaffected.

The British Empire is no more. Most of Ireland has been severed from the United Kingdom. However, the map of the world has been shaped, in part, by Britain’s view of democracy as a cherished institution for the Government of Nations. Had Britain been a governed by a totalitarian regime, Ireland would not have become independent and Britain would not have de-colonized as quickly as it did after World War II. De-colonization was not always a success story. Nonetheless, today, many nations around the World, which were formally British colonies, retain their democracy as a legacy from Britain.

During the dark days of World War II, the Allies, mostly democratic Nations, fought for the democratic rights which the European Nations enjoy today.

Today, Britain is still a major player in World politics. That position is owed, in no small part, to its ability to regularly form a strong government through the retention of the first past the post (FPTP). Strong government does not necessarily equate to good government but it does provide the ruling party with more scope to make unpopular policy decisions, which are in the National interest.

Today, with the exception of China, every major nation in the world has its governance directly empowered by democracy of some kind. Democracy, as an outlet for giving people a say in the way they are governed, appears to have triumphed in most of the World.

The debate about democracy does not end simply with a conclusion that it is the right model for Government power of any nation. Depending on the structure of the main organs of state and the mode of electing a representative, democracy comes in a variety of different packages. Northern Ireland regional Government has its own peculiar system which is set up to cater for sectarian division. Constitutions around the world produce different kinds of Government. Not all democracies, including Britain, have an elected head of state.

The system of voting can shape the Government in a number of different ways.   For example, if the system of voting used to elect a sovereign parliament is through proportional representation, that is more likely to result a coalition Government.  Unless a Nation is in a great crisis, such as being in a war or in a great economic depression, a coalition Government is usually much weaker and more populist than a one-party Government.

A crucial feature of a democracy is that it results in a Parliament with substantial power being elected and that Parliament either produces an executive directly or an elected President appoints the Executive.   The quality of democracy depends on a person’s point of view.  The following questions, going to the issue of quality, occur.

Within the next 19 months, there is likely to be a UK – wide referendum on replacing the FPTP system with Alternative voting (AV).  Some of these questions are likely to be uppermost in the minds of the voters.

Although FPTP has survived in Britain, it does not necessarily follow that it is the best or the right system of electing an MP. Under FPTP, the candidate with the highest number of votes becomes the constituency MP. Under AV, the first candidate to achieve 50% of the votes, either on the first count or on later counts, after the less successful candidates have been eliminated and had their votes transferred, is entitled to represent the constituency.

Can it really be said that an elected MP, who did not win the first count, should be the rightful representative of a constituency? Of course, it may be argued that a candidate, who does achieve more than 50%, has more legitimacy. It depends upon which way you look at it. AV would certainly reduce the number of safe seats. It would certainly alter the political dynamic to a very fundamental degree.

Writing on Conservative Home, Lord Norton has set out the case for retaining FPTP.   Most Conservatives favour retaining FPTP. Rene Kinzett, author of “Think Politics” is one of those who do not.  He argues that fewer safe seats and the fact that a winning MP has to build a broader coalition is a good thing.

When the referendum on AV arrives, I will be voting to retain FPTP for two reasons. Firstly, I believe that AV gives too much power to tactical voters or the “anti-incumbent” vote. Secondly, I believe that AV will lead to more populism and much weaker policy making.   In fact, that is looking at Kinzett’s coalition – broadening argument in a different light.  It is a recipe for an MP being all things to all men at the expense of consistency and integrity and it is fair to say that in the Republic of Ireland, TDs are not as quick to take responsibility for difficult decision-making precisely because they are under much greater pressure to be popular.

Populism is one of the worst features of modern democracy. The big problem with populism is that it is driven by short-term political pressure at the expense of longer-term good political planning.   With or without AV, a certain degree of populism will continue to exist. Unfortunately, far too often, the need for parties to win elections takes precedence over the National interest.

In the next post on this topic, I will discuss the scourge of populism in more detail and constitutional locking mechanisms which might eliminate its worst excesses.