The Newsletter is publishing a series of Articles in relation to a debate on the future of the Union.  I have not yet read all of the Articles.  Certainly, I will and I intend to give credit to anything which is written with authority.

One of these articles was published 6 days ago.  It was written by the Newsletter’s News Editor, Ben Lowrie.

If you read that article, you might have been convinced that more and more Catholics are adopting a Northern Irish Identity.  Mr. Lowrie referred back to one of the Newsletter’s front page reports (18 months ago) discussing the findings of a Northern Ireland Life and Times (NILT) Survey.  He said this:

“In a troubling development for republicans, the Northern Ireland Life and Times Survey showed that 10 years on from the signing of the 1998 Belfast Agreement, almost one in four Roman Catholics (23 per cent) were willing to be tagged under the Northern Irish banner, a title they previously shunned in preference of labels such as Irish.”

Notice Mr. Lowrie’s choice of the word “banner.”   There is a flag called ‘the Ulster Banner’ but one thing that the Northern Irish Identity does not have is a banner.  Perhaps this is indicative of a sectarian mindset.  He also says this:

“Increasing numbers of Ulster Catholics are now comfortable with the concept of Northern Irishness, and by extension Northern Ireland.”

Having checked the statistics quoted by the Newsletter, this report was making reference to the 2007 survey.  Two surveys have been published since then.   I have checked all of the surveys published by NILT where they ask the question “Which of these best describes the way you think of yourself?”  The choices of answer included British, Irish, Northern Irish and Other.   All of the surveys show a breakdown for each answer between Protestant, Catholic and ‘no religion.’ 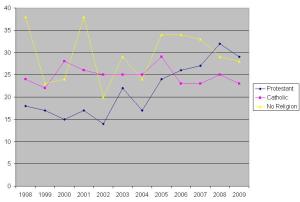 Mr. Lowrie presumably gets paid for what he writes.  It beggars belief that he has failed to spend some time checking his facts.